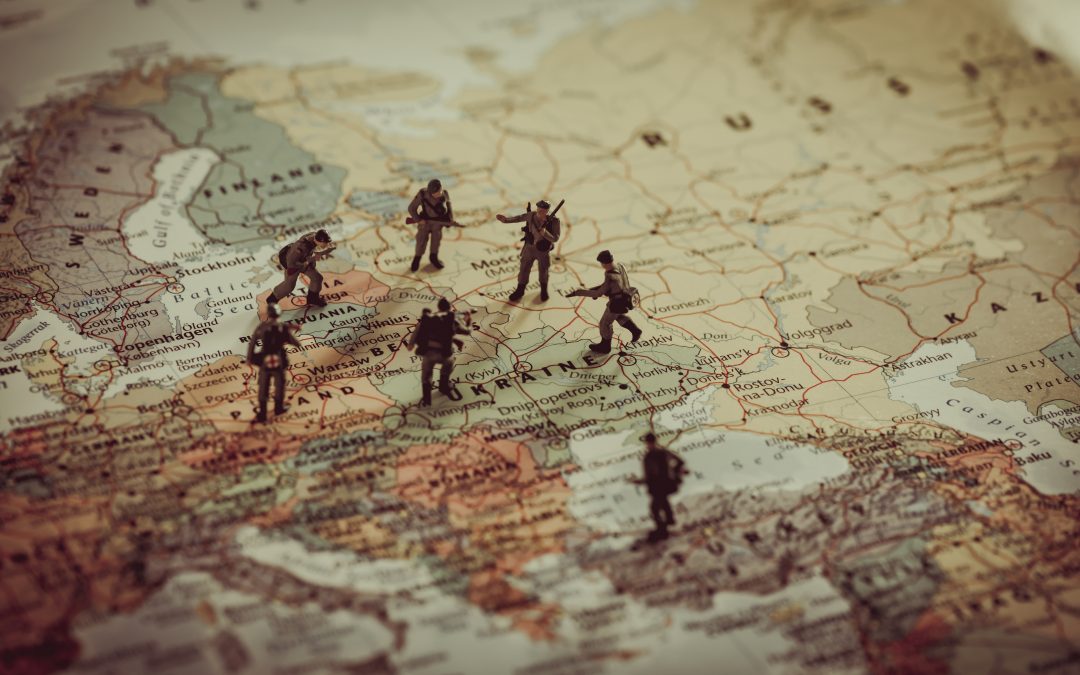 “It’s no wonder that truth is stranger than fiction.
Fiction has to make sense.”

Usually, when we write our quarterly investor commentary, we perform a deep dive analysis into one particular subject that offers long-term investment relevance for our clients. However, history has moved rather quickly across numerous fronts in the past 90 days, with many important investment implications. We thought it would be better to survey the landscape a bit more broadly this quarter to try to make sense of the tectonic changes that have transpired.

In late February, Russia unilaterally launched its invasion of Ukraine. While hoping that peace, calm, and diplomacy will ultimately prevail, we will let others comment on Russia’s military strategy and the likelihood of its eventual success.

From an investing standpoint, a far more transformative event than the invasion itself was the West’s economic sanctions against Russia in reaction to the invasion. The United States and the European Union swiftly applied a wide range of economic sanctions against Russia, affecting its banks, exporters, and oligarchs. At the same time, multinational corporations headquartered in the West, such as BP, Coca-Cola, and Visa, abandoned their Russian operations or announced intentions to divest from their longstanding Russian investments. The United States announced a ban on Russian energy imports, and the European Union is currently debating a ban on energy imported from Russia.

At the same time, the U.S. economy is experiencing a withdrawal in fiscal spending of more than $1 trillion, while the Federal Reserve is trying to tighten financial conditions aggressively. If the combination of a significant fiscal and monetary stimulus, known as “helicopter money,” is a sure-fire way to create inflation, we would assume that the opposite of helicopter money, which is what is happening today, would certainly be a sure-fire way to stop inflation. Perhaps the reason that stocks have not yet corrected further is that investors don’t believe that Congress and the Federal Reserve have the courage to remain austere for very long.

The long-term implications of these economic and financial events are numerous and wide-ranging. We expect history to document this period as a critical inflection point in economic history, with profound, long-lasting effects on global trade, energy security, inflation, interest rates, and the international monetary system.

In summary, a lot is happening right now. Our long-term outlook (5 years) has become more inflationary than it was 90 days ago, while our short-term outlook (6 months) for the markets has become more cautious due to the combination of fiscal withdrawal, monetary tightening, and the negative impact of quickly rising food and energy prices.

Let’s review some of the investment implications of these economic developments on various asset classes:

Fixed Income
Interest rates have increased at a rapid pace over the past ninety days as a result of three factors. First, inflation expectations have increased, causing bond investors to demand higher interest rates and push down bond prices. Second, the Federal Reserve is setting expectations for regular quarter-point interest rates over the next several years, which has caused 2-year Treasury bond yields to increase to 2.56%. Third, the Federal Reserve has stopped buying Treasury bonds, causing 30-year interest rates on Treasury bonds to rise to 2.88%. At the same time, the benchmark 30-year fixed mortgage is now 5.07%, well above the 3.20% rate that homebuyers enjoyed as recently as late December 2021.

As a result of these remarkable interest rate increases, the first quarter of 2022 was difficult for bond investors, as bond prices declined across all issuances. While generating negative returns for bond investors, higher interest rates also result in higher debt service costs for prospective households who use mortgage financing, corporations who have to issue corporate debt, and governments like the United States that need to finance their deficit spending plans.

Our clients generally own an underweight position in bonds compared to just a few years ago due to our view that bond interest rates do not adequately compensate investors for inflation. Rising interest rates do not make bonds attractive when inflation continues to exceed the interest rate paid on bonds significantly. We continue to seek out alternative investments as substitutes that might provide a better return for our wealth management clients.

Cash
Today, cash is a terrible long-term investment, given high inflation rates and near zero interest rates on money market funds, but it does offer optionality. When almost all financial assets are going down in price together, similar to what occurred in March 2020, those investors with cash were able to take advantage of incredible bargains. We may well be approaching another time when it could be useful to have an outsized cash position.

Equities
We mentioned the Arab Oil Embargo of 1973 earlier, which set the stage for higher oil prices and an inflationary environment that persisted for following ten years. During that decade, the U.S. stock market lost more than half of its value (adjusted for inflation) as corporate operating margins declined while Price/Earnings ratios compressed.

Worryingly, we are entering the current inflationary period at a time when the U.S. stock market is valued at a near-record high. In 2001, Warren Buffett remarked to Fortune magazine that the Market Cap to GDP ratio is “probably the best single measure of where valuations stand at any given moment.” By that measure, shown in the graph below, the U.S. stock market is currently at a record level in terms of being expensive and is orders of magnitude more expensive than it was when the Arab Oil Embargo occurred. The U.S. stock market index is unlikely to be a great place to hide from the bond market. 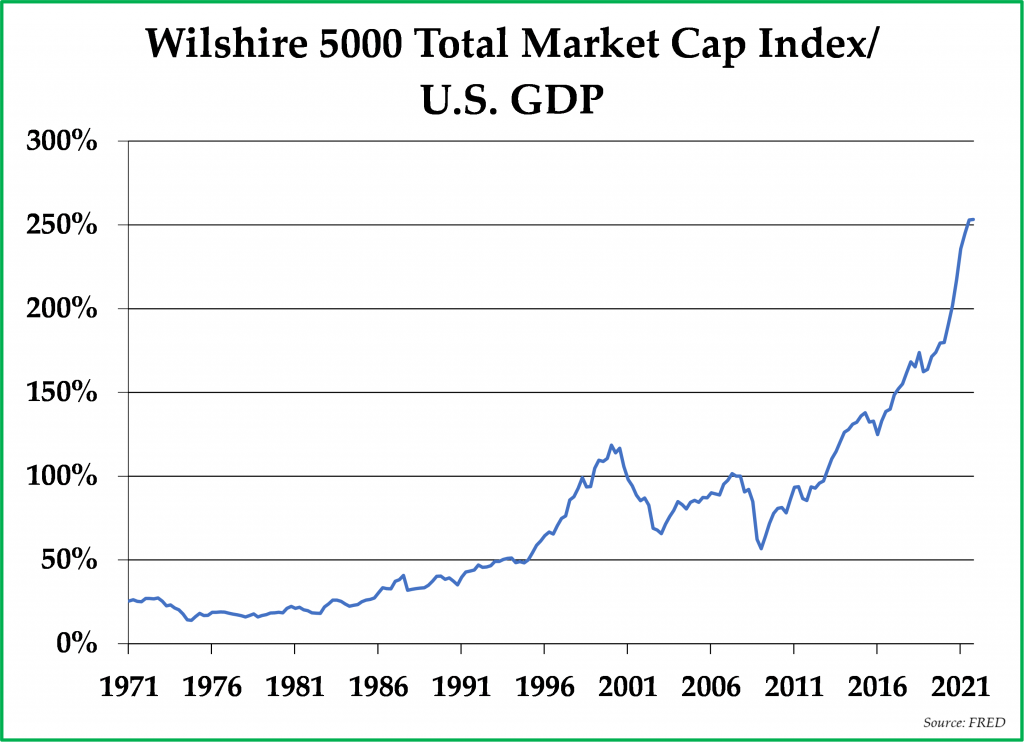 The Real Estate Market
We have been bullish on the U.S. real estate market during the past few years. However, we are becoming more cautious in the short term. Interest rates have risen very quickly, impacting the price new buyers will be willing to pay for real estate. Second, we expect that foreign demand for U.S. real estate will be diminished due to the asset confiscation efforts being applied to Russian oligarchs. Third, rising food and energy prices could make it more difficult for landlords to raise rents.

However, our long-term view remains bullish due to the strong fundamentals of this industry. Interest rates should remain well below the rate of inflation, which is an excellent environment for real estate investments that are financed with long-term, low-cost debt. An ongoing labor shortage should support persistent wage increases, which should allow for rents to continue rising. Increasing costs for labor, land, and materials should increase replacement costs for real estate, which would support real estate values. Finally, the United States now suffers from a structural shortage in housing after years of underbuilding following the Great Recession.

Gold
The price of gold has increased year-to-date in 2022 and helped offset the poor returns of fixed-income investments. As the economy continues to slow, we expect that investors will increasingly turn to gold as a safe-haven investment. Long-term Treasuries have not been working as a safe haven this year, which will likely cause even more investors to initiate new gold positions or increase their existing gold positions.

Recent geopolitical developments have increased the likelihood of rising gold prices. As countries move towards trading in local currencies, a neutral reserve asset will be necessary to offset trade imbalances. We expect that neutral asset to be gold, as central banks own it and have been buying more gold ever since the Great Recession. However, gold can only work as a neutral reserve asset with a much higher price than it has today. Just as gold outperformed all other asset classes during the inflation era of the 1970s, we expect gold to outperform all other asset classes during the coming inflationary decade.

This commentary is prepared by Pekin Hardy Strauss, Inc. (dba Pekin Hardy Strauss Wealth Management, “Pekin Hardy”) for informational purposes only and is not intended as an offer or solicitation for the purchase or sale of any security. The information contained herein is neither investment advice nor a legal opinion. The views expressed are those of the authors as of the date of publication of this report, and are subject to change at any time due to changes in market or economic conditions. Although information has been obtained from and is based upon sources Pekin Hardy believes to be reliable, we do not guarantee its accuracy. There are no assurances that any predicted results will actually Past performance is no guarantee of future results. The Consumer Price Index (CPI) is an unmanaged index representing the rate of the inflation of U.S. consumer prices as determined by the U.S. Department of Labor Statistics. The Bloomberg US Aggregate Bond Index is a broad benchmark index for the U.S. bond market. The index covers all major types of bonds, including taxable corporate bonds, Treasury bonds, and municipal bonds. The Wilshire 5000 Total Market Index is a market-capitalization-weighted index of the market value of all American-stocks actively traded in the United States.