When will the Federal Reserve Pivot?

“If you don’t have price stability,
the economy is really not going to work
the way it’s supposed to.”

At the end of May, the year-over-year inflation rate reached 8.6%, its highest level recorded since 1981. Due to this remarkably high inflation, the U.S. stock and bond markets are off to their worst start in the past 50 years. Besides energy, food-related commodities, the U.S. dollar, and gold, investment returns for nearly every other asset class are in negative territory this year. Moreover, data indicate that it is likely that the U.S. economy has already entered a recession.

Unfortunately, prices are currently very unstable, and, as Chairman Powell suggested above, the economy is not working as it should. These problems, which stem from unprecedented fiscal spending in 2020 and 2021 combined with aggressive monetary easing on the part of the Federal Reserve, are now being addressed with fiscal and monetary tightening. The disappointing result of these policy pendulum swings is stagflation: a combination of lackluster real economic growth and rising prices.

The economy and the markets have become highly financialized (i.e., debt levels are extremely high) during the past several decades; with such indebtedness, the future path of the markets depends greatly on monetary policy and interest rates. As long as the Federal Reserve seems intent on raising interest rates and reducing the size of its balance sheet, we believe liquidity will continue to disappear from the financial markets, and asset prices will continue to decline.

Many investors, including ourselves, are now asking what will cause the market to reverse course?

The Economy
The U.S. economy is facing significant headwinds at the present moment, and a recession may have already begun. These headwinds include the following: 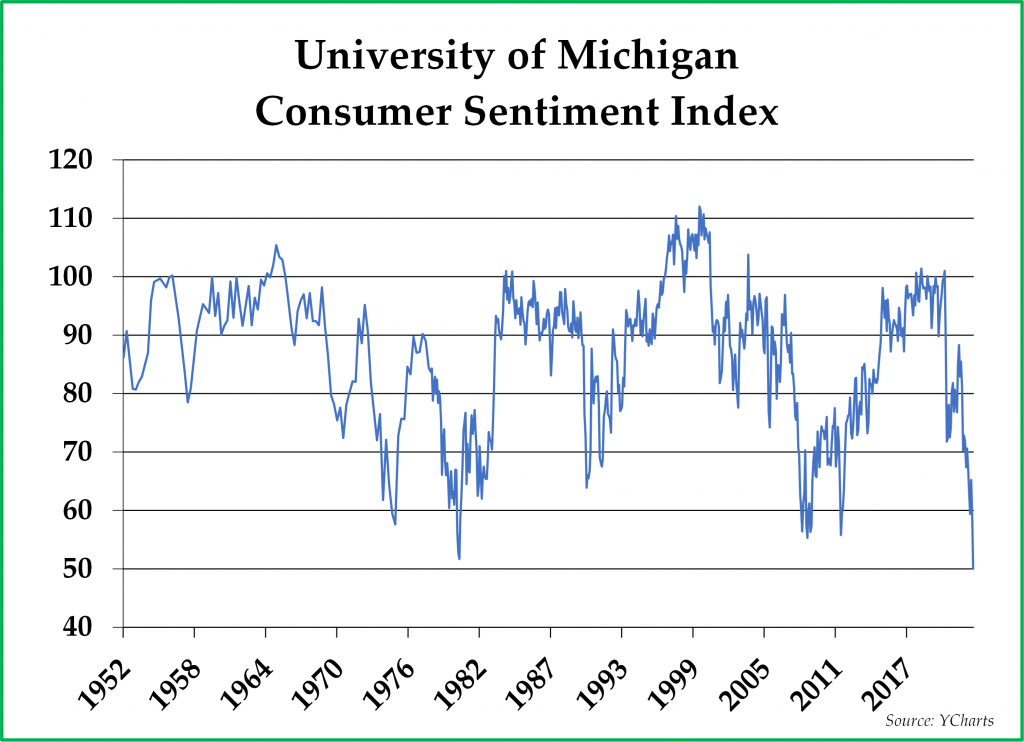 The technical definition of a recession is two quarters in a row of negative real GDP growth. In Q1 2022, real GDP declined by -1.6%. In Q2, the Atlanta Fed’s GDPNow real GDP estimate has been falling quickly and is currently expecting a -2.1% growth rate. If the Atlanta Fed’s estimate proves accurate, then it means that we are already in the second quarter of a recession. It also means that the Federal Reserve is likely to be making another mistake by tightening monetary policy into a recession.

The Stock and Bond Markets
As mentioned above, the stock and bond markets have deflated significantly thus far in 2022. Asset values worldwide have declined by approximately 40% of global GDP, which is almost triple the decline relative to GDP that occurred during the Great Financial Crisis in 2008. The magnitude is much greater in the current downturn because the values of financial assets have risen considerably relative to GDP since the financial crisis, and far more debt relative to GDP has been issued since 2008. We make this comparison because the markets are drivers in the current economic slowdown. 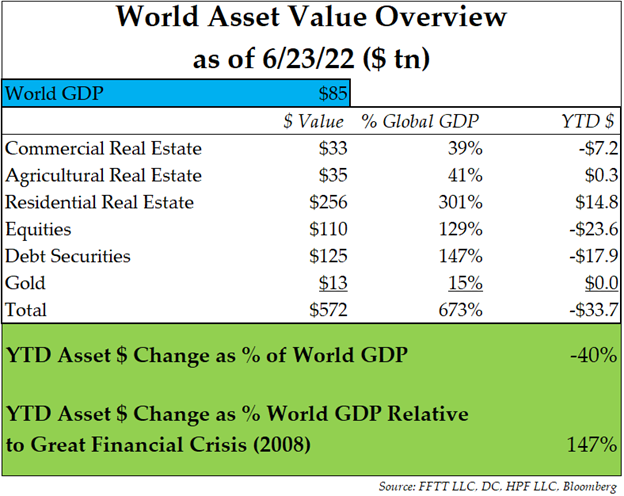 The Federal Reserve is purposefully engineering these asset price declines, just as it engineered the asset price increases starting after the Great Financial Crisis in 2008/2009. At the time, the Fed was worried about inflation. Then, Federal Reserve Chairman Ben Bernanke wrote an OpEd in the Washington Post discussing how Quantitative Easing (Q.E.) would lead to rising 401k balances that would spur economic growth. Today, to combat inflation, the Fed faces the opposite challenge: how to cool rapidly increasing prices for goods and services. To contain inflation, Jerome Powell is seeking to ”tighten financial conditions,” which means removing liquidity so that asset prices decline, hoping that it will cause consumers to reduce spending. With less aggregate consumer demand, Chairman Powell assumes that price increases should cool down or reverse. Thus far, Federal Reserve policy has created price declines in the stock and bond markets, but, with this strategy, Chairman Powell is also attempting to engineer a slowdown in real estate values. With 30-year mortgage rates near 6%, the housing market is also beginning to show signs of slowing down.

Thus far, the equity market decline has been most pronounced in the technology sector, particularly among companies offering the promise of growth but without earnings or cash flows. In addition, P/E ratios are falling across the board for profitable companies. However, for those companies outside of the energy and food sectors, more pain could very well be coming. Operating costs are rising at a double-digit rate, and, with consumer wallets stretched, many companies are having difficulty raising prices. That phenomenon will likely translate into compressed profit margins; we expect many disappointments when companies report their second-quarter earnings over the next few weeks.

The Federal Reserve Decision Tree
The legislated dual mandate of the Federal Reserve is to promote stable prices and maximum employment. These two mandates can be challenging to balance, and the present moment is undoubtedly one of those times.

Confronted with the most significant inflationary pressures since the early 1980s and a twin bear market in stocks and bonds, the Fed is left with two unattractive options going forward: 1) adhere to its mandate of price stability by fighting inflation through tightening financial conditions; or 2) support the economy and asset prices by easing financial conditions as the economy appears poised to enter a recession. Thus far, the Federal Reserve is leaning heavily on option #1 by continuing to pursue policies that tighten financial conditions.

In our view, the current bear market in stocks will likely end when the Federal Reserve reverses its current monetary policy. The question then becomes: at what point does the Fed pivot to option #2?  We foresee two possible scenarios.

First, if the economy goes into recession and unemployment starts to rise significantly, that could cause the Federal Reserve to pivot. Once layoffs become widespread, consumer spending will likely slow further, and inflationary wage pressures should decrease. As already mentioned, the second mandate of the Federal Reserve is maximum employment. At some point, the Federal Reserve will realize that the economy is heading into a deep recession, reverse directions on monetary policy, and figure out a way to bring interest rates down again.

Second, if  long-term Treasury yields rise  considerably in reaction to a growing imbalance between supply and demand, that could also cause the Federal Reserve to pivot. Chairman Powell likes to talk about how he is willing to do whatever it takes to control inflation, as Chairman Paul Volcker did to reduce inflation in the 1980s. However, the balance sheet of the U.S. government could not be more different than it was during Volcker’s time. 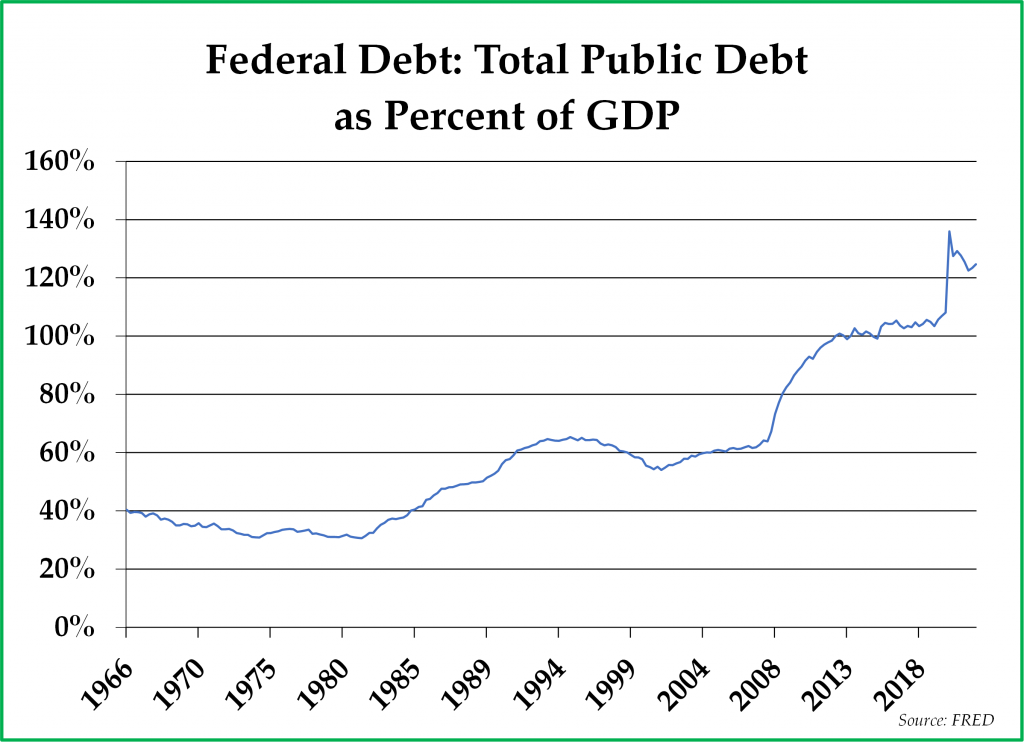 In addition, a 3% increase in interest rates would increase the Federal deficit today by as much as 2.5% of GDP. The indebtedness of the United States government very much limits the Federal Reserve’s ability to hike interest rates for a sustained period. Moreover, with asset prices declining and the economy slowing, tax revenues should soon fall. Stock and bond market declines are not just pressuring pension funds, retirement accounts, and household budgets; they are also pressuring the budget of the U.S. government itself. At the same time, foreign central banks are no longer accumulating U.S. Treasuries as foreign currency reserves. Since 2020, the primary buyer of U.S. Treasuries has been the Federal Reserve, which has printed reserves and used those reserves to purchase trillions of dollars of U.S. Treasuries. For now, the Federal Reserve has ceased buying U.S. Treasuries, which is likely one of the reasons that interest rates have been increasing recently, and it promises to sell some of the U.S. Treasuries it has accumulated. All of this raises the question: who will be the marginal buyer of U.S. Treasuries with 10-year yields at 3% and inflation at 8%? We do not have a good answer to this question, which is why the Treasury market could stop functioning, as it did in March 2020, which would prompt the Federal Reserve to re-enter the bond market and buy everything in sight.

Thus, we believe the Fed will continue tightening financial conditions until something breaks in the bond market, or perhaps until something breaks internationally due to a rapidly rising U.S. dollar. At that point, the Fed will be forced into option #2, easing financial conditions into a weakening economy which likely would involve buying Treasuries en masse once again to cap interest rates and keep the debt service costs of the United States manageable and the rise of the dollar under control. The Federal Reserve might do this even while inflation remains elevated, which would further exacerbate inflationary pressures. The timing of when this might happen is challenging to estimate accurately, but we would imagine that economic and political pressures would force such a pivot before this year’s midterm elections.

Investment Portfolio
In the short term, we expect asset prices to continue declining as financial conditions tighten and corporate earnings disappoint. So far this year, the standout asset classes to own have been cash, energy, agriculture, and gold, and that should continue to be the case until the Federal Reserve pivots. Rest assured that we are monitoring the markets closely and managing risk during a period of significant uncertainty.

When the Federal Reserve pivots, it will likely not be a good time to continue to own overweight cash positions. Instead, it will be an excellent time to hold equity positions in commodity producers and companies that can maintain pricing power in a highly inflationary environment. Specific real estate sectors should also do well. In addition, a declining dollar should improve the fortunes of both emerging markets and gold. We are already overweight many of these sectors in client portfolios and may accumulate additional positions in the coming months as asset prices continue to decline.

Please do not hesitate to reach out to your portfolio manager if you have concerns about the market or your investment portfolio that you would like to discuss in more detail.

We hope you are well and are having a good summer. We remain grateful for the trust you’ve placed in us to navigate your investment portfolio through the stormy waters of today’s financial markets.

This commentary is prepared by Pekin Hardy Strauss, Inc. (dba Pekin Hardy Strauss Wealth Management, “Pekin Hardy”) for informational purposes only and is not intended as an offer or solicitation for the purchase or sale of any security. The information contained herein is neither investment advice nor a legal opinion. The views expressed are those of the authors as of the date of publication of this report, and are subject to change at any time due to changes in market or economic conditions. Although information has been obtained from and is based upon sources Pekin Hardy believes to be reliable, we do not guarantee its accuracy. There are no assurances that any predicted results will actually occur. Past performance is no guarantee of future results. The Consumer Price Index (CPI) is an unmanaged index representing the rate of the inflation of U.S. consumer prices as determined by the U.S. Department of Labor Statistics. The Bloomberg US Aggregate Bond Index is a broad benchmark index for the U.S. bond market. The index covers all major types of bonds, including taxable corporate bonds, Treasury bonds, and municipal bonds.