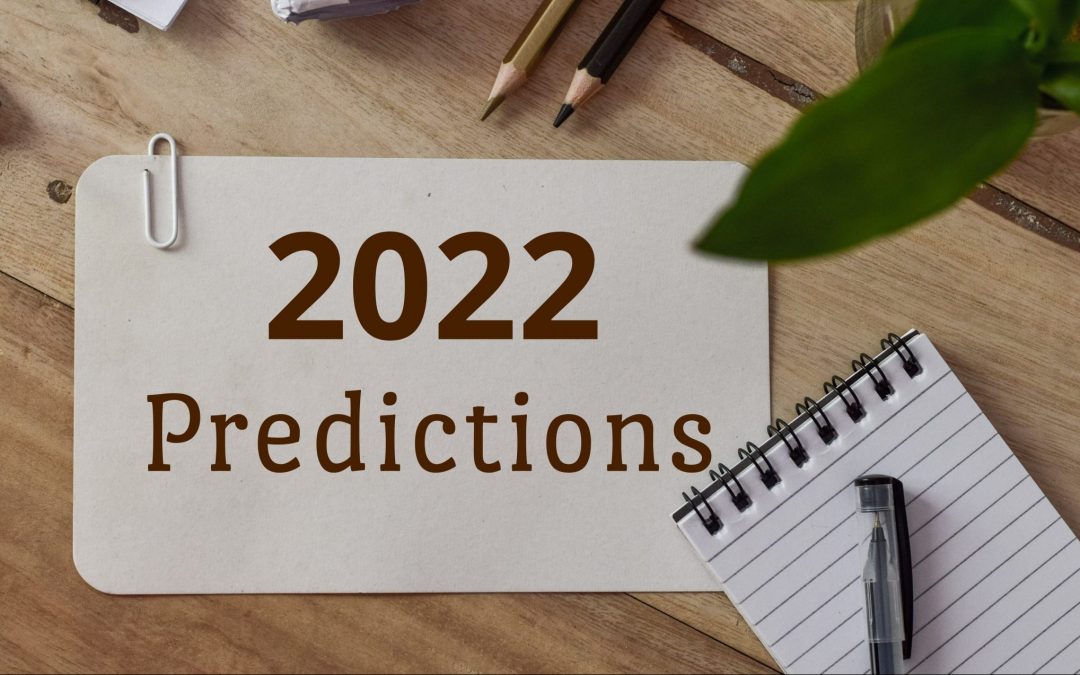 “Never let the future disturb you.
You will meet it, if you have to, with the same weapons of reason
which today arm you against the present.”

Making predictions is always tricky, and short-term forecasts are seemingly more difficult than long-term forecasts because timing plays such an important role. That said, predictions can be fascinating and informative, even if some if not many of them turn out not to occur. We share our list of predictions below that we believe will likely influence the economy and the capital markets in 2022.

Putting together these ten predictions was an interesting and thought-provoking exercise. It’s important to note that we humbly assume many of them will turn out to be incorrect. We generally place very little weight on our ability to predict short-term events, just as we place very little weight on others’ ability to predict short-term events. With that said, we very much do have our eye on long-term fundamental trends. We are also constantly looking for situations where the market is undervaluing a company or financial asset.

For example, many investors, including ourselves, correctly predicted the housing bust that eventually caused the Great Financial Crisis in 2008. We sent a letter to our clients in 2005, advising them not to chase the housing bubble; we knew that the housing market was in a bubble which, sooner or later, would turn into a painful bust. While we knew that pain was coming to the financial markets when the housing bubble turned into a bust, we had no idea it would not happen until September 2008. During those years, our key investment insight was that we wanted minimal housing exposure because housing and the debts associated with housing seemed to be a ticking time bomb. While our timing was a little early, our top-down view of the housing bubble kept us out of a fair amount of trouble.

At the present moment, global debt as a percentage of GDP is at a higher level than it has ever been in recorded history, going back for 5,000 years. 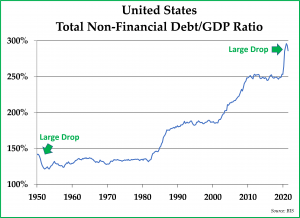 Like the housing bubble, a rising global debt level also represents significant investment risk. We expect that the resolution to this problem will occur more slowly than the housing bust, taking the form of a multi-year inflationary period. That inflation will likely be accompanied by continued efforts by the Federal Reserve to cap interest rates at low levels and periodic multi-trillion-dollar stimulus packages passed by Congress. If our policy forecast is correct, GDP should increase faster than debts over time. Indeed, as you can see in the chart to the right, the combination of high inflation and low-interest rates has worked as an effective policy in slightly reducing the U.S. Debt/GDP ratio over the past twelve months. Notably, even with the recent drop, the Debt/GDP ratio is still quite far from normal.

It is also notable that, during the 71 years covered in the chart above, a meaningful decline in the Non-Financial Debt/GDP ratio occurred only two times: in 1950 and 2021. Both declines occurred when inflation had accelerated into the high single-digits while bond yields remained in the low single-digits. When inflation-adjusted bond yields remain deeply negative, it’s harmful to fixed income investors but helpful for countries trying to reduce their debt leverage.

In 2022 and beyond, we do not know the timing of when inflation will accelerate and when it will decelerate, just as we did not know when house prices would finally decline or when subprime mortgage prices would decline as the housing bust manifested itself. With little respect to timing, we are generally constructing our client portfolios to make them more resilient to rising prices. This means less exposure to fixed income securities and more exposure to undervalued stocks, real estate, gold, and other assets that we believe should hold their value in an inflationary environment.

We said farewell to Erin Kelsey, our financial planning analyst, in recent weeks. Erin decided to make an industry change and took a job with Willis Towers Waters as an HR Consultant. We are grateful for the many contributions she made to the firm and to our clients’ financial plans during the past five years. We wish her all the best in her future career and have begun recruiting her eventual replacement.

We wish you and your families a happy, healthy, and prosperous 2022. Thank you again for the trust you have placed in us to manage your hard-earned capital.

This article is prepared by Pekin Hardy Strauss, Inc. (“Pekin Hardy”, dba Pekin Hardy Strauss Wealth Management) for informational purposes only. The information and data in this article do not constitute legal, tax, accounting, investment or other professional advice.   The views expressed are those of the author(s) as of the date of publication of this report, and are subject to change at any time due to changes in market or economic conditions. There is no guarantee that the types of investments discussed herein will outperform any other investments in the future.   Although information has been obtained from and is based upon sources Pekin Hardy believes to be reliable, we do not guarantee its accuracy. There are no assurances that any predicted results will actually occur. Past performance is no guarantee of future results. The Consumer Price Index (CPI) is an unmanaged index representing the rate of the inflation of U.S. consumer prices as determined by the U.S. Department of Labor Statistics