A Primer for Social Security 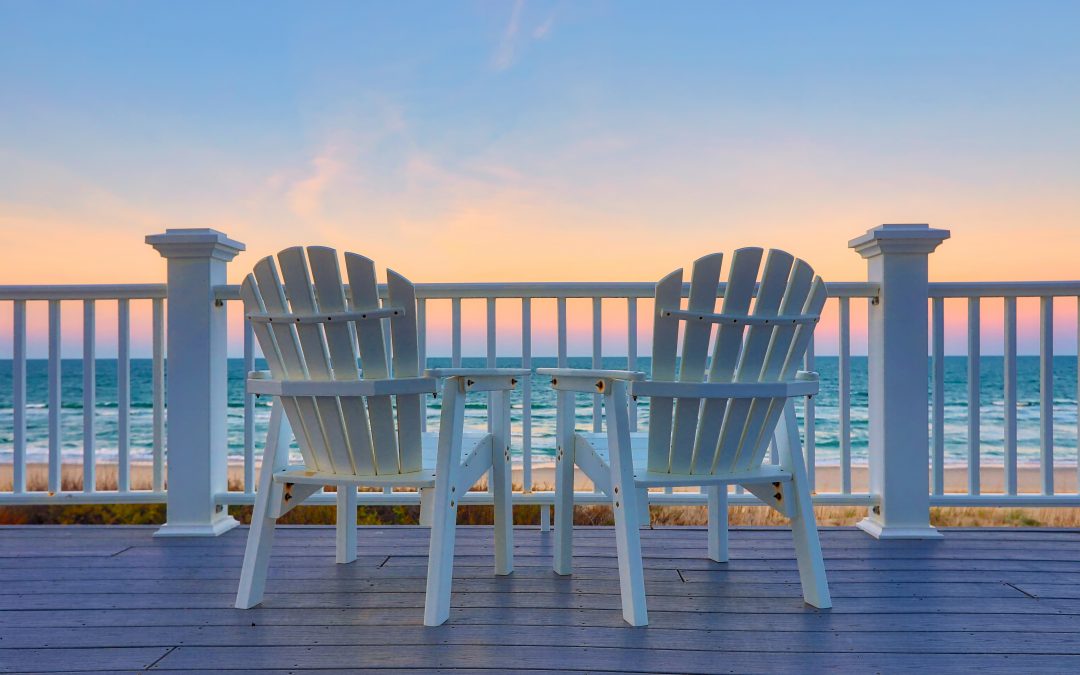 The purpose of this Navigator is to explain the basics of Social Security benefits, to discuss a few particularly useful saving strategies, and to provide additional resources that may be useful for anyone who is preparing financially for retirement about how to optimize his or her Social Security benefits.  We are providing a general summary and approach towards Social Security, while recognizing that each individual situation will undoubtedly be unique. 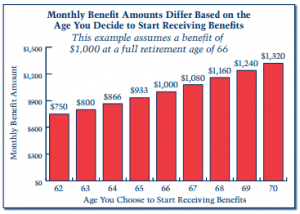 The actual calculation that the Social Security Administration uses to index retirement benefits is shown in the table below: 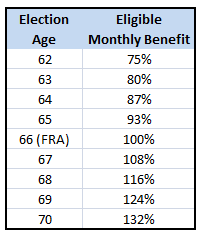 Despite the fact that delaying the receipt of Social Security benefits provides a greater annual amount throughout retirement, the decision regarding when to start receiving benefits should largely be based on projected life expectancy.  In the chart below, we show the cumulative amount of benefits received at each age, depending upon the age at which the beneficiary elects to begin receiving those benefits.  The cumulative values are calculated using an example scenario in which the beneficiary is entitled to receive $1,000 per month in benefits at full retirement age. 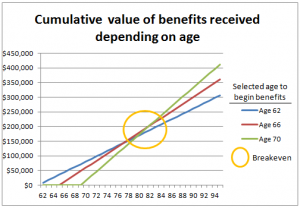 As shown above, life expectancy should play an important role in the decision regarding when to start collecting benefits.  The breakeven age for all three scenarios is approximately 82 years old.  This supports the general rule that delaying retirement benefits is the optimal course of action for anyone who expects to live beyond age 82.  If life expectancy is near 82 (or younger), then collecting benefits earlier may provide greater cumulative payments and the ability to benefit from Social Security earlier in life.[2]

It is worth noting that, while the preceding analysis makes the case for delaying Social Security benefits in order to maximize value (assuming one expects to live beyond age 82), the conventional wisdom may not apply to everyone and is dependent on an individual’s current financial status.  For those clients who are in a position to invest the proceeds that they receive from Social Security, it may in fact be in their best interest to elect payments earlier in order to benefit from compound growth.  This conclusion would depend on some very important assumptions (such as the rate of return on invested assets), but this possibility should be considered in the decision-making process.

Deciding when to begin receiving Social Security benefits is not an easy black-or-white decision and should include careful consideration of personal health, financial condition, relationship status and family longevity history.  Accordingly, we will subsequently walk through this decision for a handful of example scenarios in order to help you understand how this decision should be approached.

File & Suspend refers to a strategy in which the highest earning spouse files with the Social Security Administration to begin receiving benefits at FRA but then suspends those benefits until he or she reaches age 70.  This is done so that the filer’s spouse may begin receiving Spousal Benefits of up to one-half of the filer’s benefit, as the spouse cannot receive Spousal Benefits unless the highest earning spouse has filed.  This action allows the filing spouse to maximize his or her benefits while also allowing the non-filing spouse to receive Spousal Benefits as early as age 62.  Prior to 2016, the spouse electing to receive Spousal Benefits has the additional option of filing a Restricted Application at FRA so that his or her own individual benefit can be delayed until age 70.  Currently, during a voluntary suspension, other benefits payable on your record including Spousal Benefits are also suspended.  We provide below two examples that help illustrate these strategies for couples:

John (66) is older than his wife, Jane (62).  Jane has little work experience and has not accumulated enough Social Security credits from her own wages to warrant an individual benefit.  To help optimize their financial situation, John and Jane could do the following:

Social Security for Widows and Widowers

Electing to receive Social Security benefits at FRA or later will allow a surviving spouse to receive the deceased spouse’s full benefit amount, plus any accumulated delayed retirement credits.  This purposeful delay could be a valuable strategy in situations in which 1) one spouse’s monthly benefit is materially greater than the other spouse’s benefits, and 2) the spouse with the smaller benefit expects to outlive the spouse with the greater benefit.  Alternatively, surviving spouses whose personal benefits are greater than their Survivor Benefits may choose to apply for Survivor Benefits immediately while delaying personal retirement benefits until later.

Michael (62) wants to start collecting Social Security payments.  His wife, Rachel, passed away several years ago.  Rachel earned significantly more than Michael over her lifetime.  To help optimize Michael’s situation, he could do the following:

Divorced spouses may be eligible to receive Spousal Benefits, provided that the following criteria are met:

The Future of Social Security 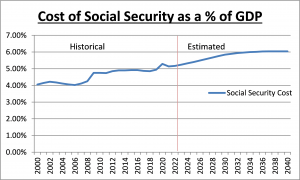 As highlighted in the graph above, Social Security costs (indicated by the blue line) are expected to consume an increasingly greater proportion of GDP moving forward.  Social Security’s growing cost can largely be attributed to demographic shifts.  Put simply, the percentage of retired individuals relative to the population is increasing, and so too are life expectancies.  Therefore, the cost burden created by Social Security will continue to increase and may cause budgetary pressures in the future.

As a result of expected Social Security cost increases, many younger workers are already expecting curtailed benefits when they retire.  For example, it is possible that the Federal government may choose sometime in the future to implement “means testing,” which would restrict who could receive Social Security benefits based upon certain income and/or net worth metrics in order to reduce the size of the Social Security burden on the Federal deficit.

The ultimate fate of Social Security is in the hands of policymakers, most of whom want to get re-elected, and Social Security benefits thus far have proved to be sacrosanct for many voters.  As President Dwight D. Eisenhower said, “Should any political party attempt to abolish Social Security, unemployment insurance, and eliminate labor laws and farm programs, you would not hear of that party again in our political history.”  Nevertheless, our goal in highlighting the risk of curtailed benefits is to emphasize the critical role that personal savings and investments should play in funding retirement income needs.

Understanding the pitfalls and benefits of Social Security can be daunting.  Our goal with this Navigator was to provide foundational information about the structure of Social Security benefits, as well as certain strategies that may be used to optimize these benefits and help you make sound financial decisions.  We understand that each client has a unique situation that was not fully captured in this document.  Therefore, we encourage you to contact us for more personalized advice on how to sort through the various Social Security options at your disposal.

To learn more about your personal Social Security benefits, you may want to access the following resources that have been made available by the Social Security Administration.

Disclaimer
All information presented was sourced from the Social Security Administration website (ssa.gov).

This commentary is prepared by Pekin Hardy Strauss Wealth Management (“Pekin Hardy”) for informational purposes only and is not intended as an offer or solicitation.  The information contained herein is neither investment advice nor a legal opinion. The views expressed are those of the authors as of the date of publication of this report, and are subject to change at any time due to changes in market or economic conditions. Pekin Hardy cannot assure that the type of scenarios discussed herein will outperform any other, and the comments should not be construed as a recommendation, but as an illustration of broader themes.  Although information has been obtained from and is based upon sources Pekin Hardy believes to be reliable, we do not guarantee its accuracy.

[1] FRA is 66 for Americans who were born prior to 1960; for those that were born in 1960 and later, FRA is 67.  It is important to note that FRA is likely to continue to increase for the younger generation.

[2]For further guidance with respect to life expectancy, we suggest you refer to the Social Security Administration’s life expectancy tables available online: https://www.ssa.gov/planners/lifeexpectancy.html

[3] The Social Security Administration’s definition of “earnings” does not include income from pensions, annuities, interest, dividends or other investment income.  Other government benefits are also excluded.