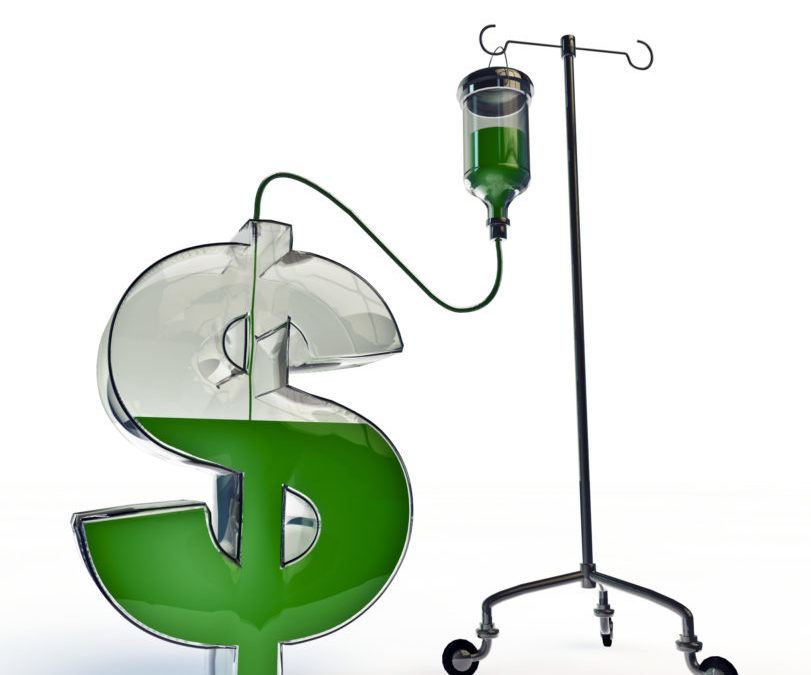 “In March 1853 she was afflicted with a pain in the chest; her tongue seemed to be
covered with a film; leeches failed to make her breathing any easier.”

The practice of bloodletting in order to cure health ailments originated thousands of years ago. Bloodletting was used to address just about any health disorder, from leprosy and the Plague to herpes and even acne.  As time progressed, bloodletting techniques evolved, and its usage peaked in the early 19th century.  One of the most notable bloodletters was Dr. Francois Broussais, a French physician who often recommended a treatment of 30 to 50 leeches at a time.  According to the New York Medical Journal, in 1833, France imported 41.5 million leeches, more than 10 times the number of leeches imported just a decade earlier.  Looking back at medical history from our modern perspective, the widespread use of leeches as a cure-all during the 19th Century seems nothing short of madness.

Monetary easing is experiencing, or at the very least approaching, its own zenith, in our view.  The 700 or so Ph.D.s at the Federal Reserve along with their counterparts at the European Central Bank (ECB), the Bank of Japan, and the Bank of England have never seen an economic problem that cannot be alleviated with monetary easing, central banking’s monetary bloodletting remedy.  Today, thanks to the easy money environment of the past couple of decades, non-financial debt to GDP stands at a record high, not just in the United States but across the world, while, not coincidentally, centrally managed interest rates are at a record low level and seemingly going lower. 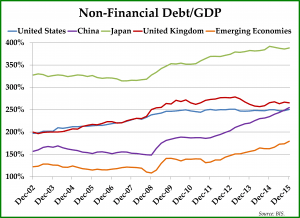 Since the Financial Crisis, global markets have experienced multiple waves of easy money experimentation, including, but not limited to 1) zero percent interest rate policies, 2) currency wars in which central bankers purposefully devalued their currencies, and 3) multiple rounds of quantitative easing.  Some argue that these unprecedented policy moves have achieved their goals; indeed, financial asset prices have increased as a result of persistently low interest rates kept in place since the Financial Crisis.  However, as demonstrated on the chart to the right, the increase in financial asset prices has occurred without a corresponding increase in disposable personal income.  In our judgment, the disparity between these two measures is a good indicator that the increase in the price of financial assets since the financial crisis is unsustainable and likely to unwind once interest rates eventually rise. 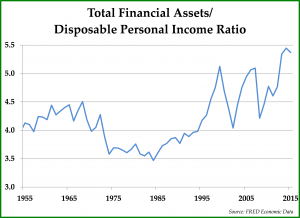 Ironically, the remedies of the central bankers have contributed much to the weakened global economy.  Low interest rate monetary policies have contributed to poor balance sheets among households, governments, and corporations alike because of the ability to increase borrowings without greater interest payments. Simultaneously, rising financial asset prices across multiple asset classes have created increased levels of wealth inequality, which in turn is contributing to deteriorating social stability.  With an economy saturated with too much debt, U.S. GDP has been growing at an anemic rate for several years.  As debt leverage continues to increase faster than GDP, mal-investment abounds, and the marginal dollar of increased credit is becoming increasingly less effective in generating GDP growth (see chart to the left).  At the same time, with the middle class shrinking quickly due to globalization, the Financial Crisis, and the easy money policies of the Federal Reserve, many are seeking economic restitution from non-establishment politicians such as Bernie Sanders and Donald Trump. The saturation of debt in the global economy has become more than an economic issue; it has increasingly become an important social issue.1 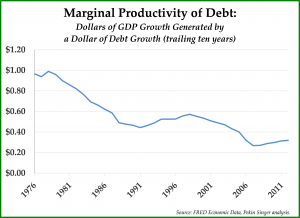 Our view of the financial system remains critical, to be sure, but even the Bank of International Settlements (BIS), an institution that essentially acts as a central bank for central banks, is expressing concern.  In their recently published annual report, the BIS concluded:

A shift to more robust, balanced and sustainable expansion is threatened by a “risky trinity”: debt levels that are too high, productivity growth that is too low, and room for policy manoeuvre that is too narrow. The most conspicuous sign of this predicament is interest rates that continue to be persistently and exceptionally low and which, in fact, have fallen further in the period under review. The global economy cannot afford to rely any longer on the debt-fuelled growth model that has brought it to the current juncture. A shift of gears requires an urgent rebalancing of the policy mix [to fiscal policies and structural reform]. Monetary policy has been overburdened for far too long.2

Because GDP continues to grow at a rate far lower than Fed forecasts, more unconventional remedies appear to lie around the corner.  If 10 leeches do not provide a cure, then perhaps 50 leeches will do the trick.  If the global economy remains weak, or weakens further, we expect central bankers to force interest rates down further and implement even more unconventional monetary policy measures:

From ZIRP to NIRP 3

In 5,000 years of monetary history, interest rates have never been negative until recently; intuitively, that makes sense, as lenders take risks when they lend their capital, and they normally expect to get paid a positive rate of return for bearing such risks.  Today, however, more than $11 trillion of sovereign bonds, representing approximately 30% of global government debt outstanding, are priced to generate negative returns to its bond holders. Negative interest rates have not yet arrived in the U.S. bond markets, but, without improved GDP growth, negative interest rates may be around the bend. 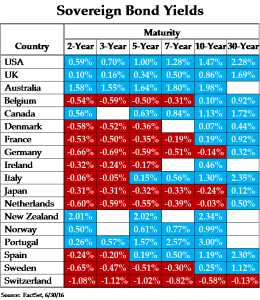 Larry Summers, the former U.S. Secretary of the Treasury, recently argued in The Washington Post that the U.S. Treasury should phase out the $100 bill in order to “make it harder for the bad guys”, and, for similarly stated reasons, the European Central Bank recently announced its intentions to phase out the 500 Euro note.  Make no mistake — Larry Summer’s $100 bill proposal has nothing to do with fighting crime, but, rather, it has everything to do with clearing the way for negative interest rates in the United States.  If savers can easily hoard physical cash with large denomination bills, negative interest rate policies would lead to depositor withdrawals, which would have a destabilizing impact on the banking sector.

The other central banking innovation being discussed in earnest is the launching of what is being called “helicopter money.”  Helicopter money is a theoretical concept conceived by the economist Milton Friedman who postulated that a central bank could create inflation whenever it desired just by handing out money to everyone, seemingly by a helicopter drop.  The idea was revived as a practical policy option by former Fed Chairman Ben Bernanke who, in a now famous 2002 speech, announced that the United States could initiate helicopter money to combat deflation and stimulate the economy.

One way of approaching helicopter money would be for the Treasury to issue 0% interest perpetual bonds to finance fiscal stimulus, and then the Fed would purchase those bonds with freshly printed money.  This policy, in theory, would stimulate GDP growth because the money supply would increase and, in addition, the velocity of circulation would finally accelerate, because the government would immediately spend the freshly printed helicopter money.

Helicopter money would, in all likelihood, provide quite a bit of short-term GDP stimulus, depending on the level of fiscal spending involved.  We suspect that helicopter money would likely provide a short-term boost to financial asset prices, but we hesitate to make a definitive forecast because the unintended consequences are so difficult to predict.  We are in uncharted waters, indeed.

In previous letters, we have written that the term “this time is different” is a dangerous phrase in finance, because almost always “this time” is likely not different at all.  However, in today’s centrally planned economic world with record indebtedness and record low interest rates, it is harder to avoid saying that this time truly is different.  The monetary remedies being unveiled are unsettling and unprecedented phenomena to witness.  Math and history suggest that all may not end well when these policies are implemented and/or when these policies are reversed; generations from now, economists and historians will be studying this period of economic history in wonderment, much as modern physicians look back today at 19th century health cures.

In the current investing environment, it makes sense to remain diversified across stocks, bonds, and precious metals in our view.  If the Fed follows Europe and Japan in implementing negative interest rates, bond prices and precious metal prices should perform well as interest rates decline.  Helicopter money should be favorable for equities and precious metals, because inflation and nominal GDP growth would presumably accelerate.  In a volatile and uncertain monetary environment, we believe our clients’ investment portfolios are well positioned by being diversified across asset classes.

Policy matters aside, the U.S. stock market remains expensive. As always, we look to deploy clients’ equity capital in out-of-favor businesses, in out-of-favor industry sectors, and in out-of-favor foreign markets, trying to generate attractive investment returns by identifying mispriced securities.  Most of our new equity purchases fit into one or more of these categories, with out-of-favor and undervalued being the common denominators for new investments.

As always, we thank you for your enduring trust in our ability to navigate your investable assets through calm as well as difficult waters, however uncharted they may be.  As your financial advisor, we remain honored with the privilege of providing you with financial advice and of managing your investment portfolio.

1 In our Q3 2013 letter, we discussed the driving factors behind the decline of the middle class.