Why Has the Stock Market Become So Volatile? 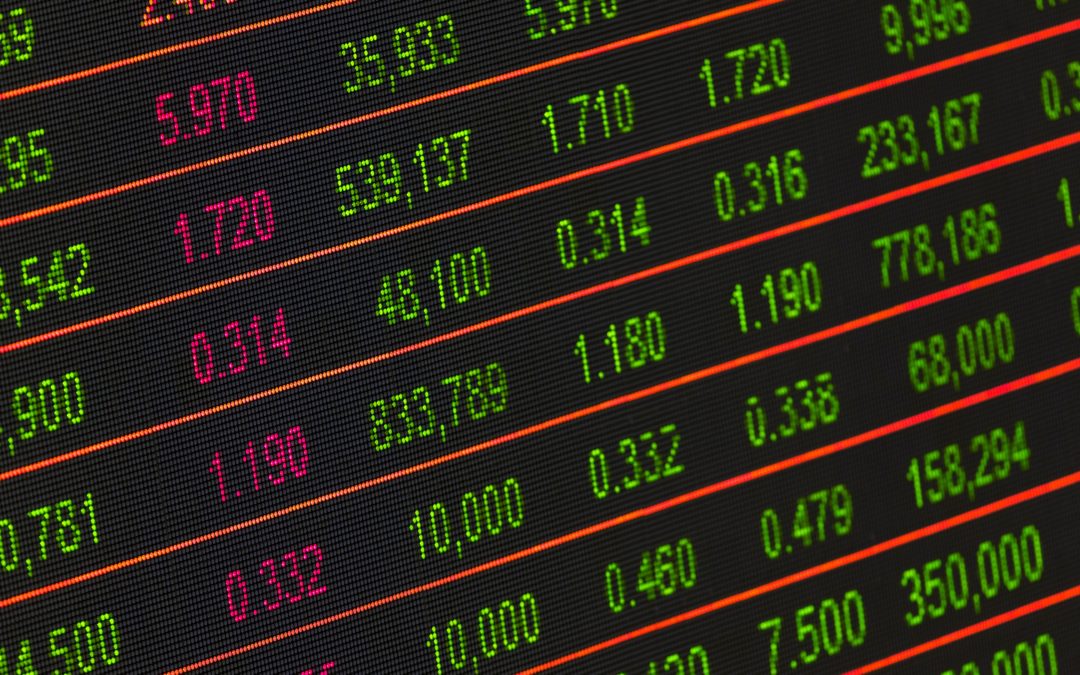 “Just cause you got the monkey off your back
doesn’t mean the circus has left town.”

The S&P 500 Index generated a total return of -9.0% in December, which was the worst December return since 1931 in the midst of the Great Depression. The quarterly return of the S&P 500 Index was -13.5%, representing the worst fourth quarter return since 2008, which was in the midst of the Financial Crisis.  Outside of cash, there was no place to hide for investors in 2018, which was just the opposite of 2017 when nearly every asset class generated a nicely profitable return. Judging by the December decline in market prices, it appears that the wheels may be coming off the bus. 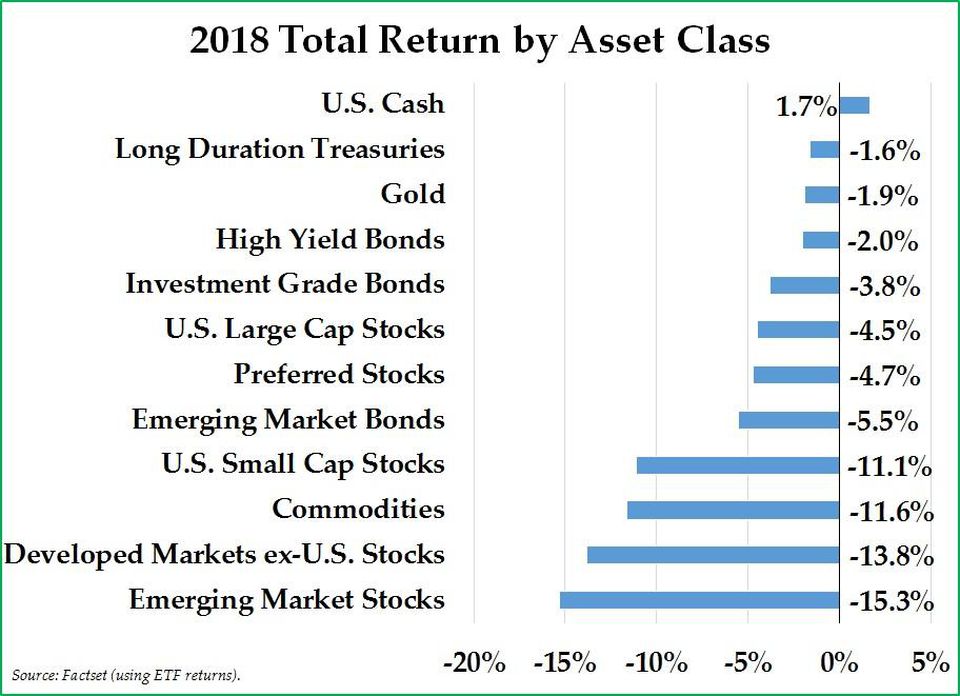 We are being asked by some, “What the heck just happened?”  It is still too early to answer this question with certainty. However, until we see evidence to the contrary, we are attributing the decline in asset prices in 2018 and the U.S. market chaos in Q4 to monetary tightening on the part of the Federal Reserve.  Our operating hypothesis is that higher interest rates and recent reductions in the size of the Federal Reserve’s balance sheet are reducing liquidity and causing asset prices to fall.  Given the high level of leverage of consumers, corporations, and governments, the financial system has become addicted to the Federal Reserve providing excessive liquidity; with the reverse now occurring, bad things are starting to happen in the financial markets.

For now, we think it is unlikely that the United States has entered a recession.  To be sure, the economy is not firing on all cylinders; for example, the auto and housing sectors are experiencing particular weakness.  If interest rates keep rising and markets continue to weaken, it is likely the United States will go into a recession due to the (reverse) wealth effect. In other words, as stocks decline in price, consumers will feel less wealthy and will be inclined to spend less and save more, thereby reducing economic growth.

Importantly, the recent decline in the U.S. stock market follows even greater stock market declines which took place in foreign equity markets earlier in the year, so the problem appears to us to be far more than just a U.S. problem. Central banks have been tightening around the world, and the U.S. economy outperformed the economies of many other countries in 2018.  With that said, President Trump’s communication style does not enhance investor confidence, to put it mildly, while geopolitical frictions are seemingly increasing every day.

In the wake of the Financial Crisis, the Federal Reserve took two important actions to reflate the economy: it cut interest rates to zero percent, and it provided an enormous amount of additional liquidity by printing money to buy U.S. securities, described by the euphemistic term “Quantitative Easing” or “QE.” 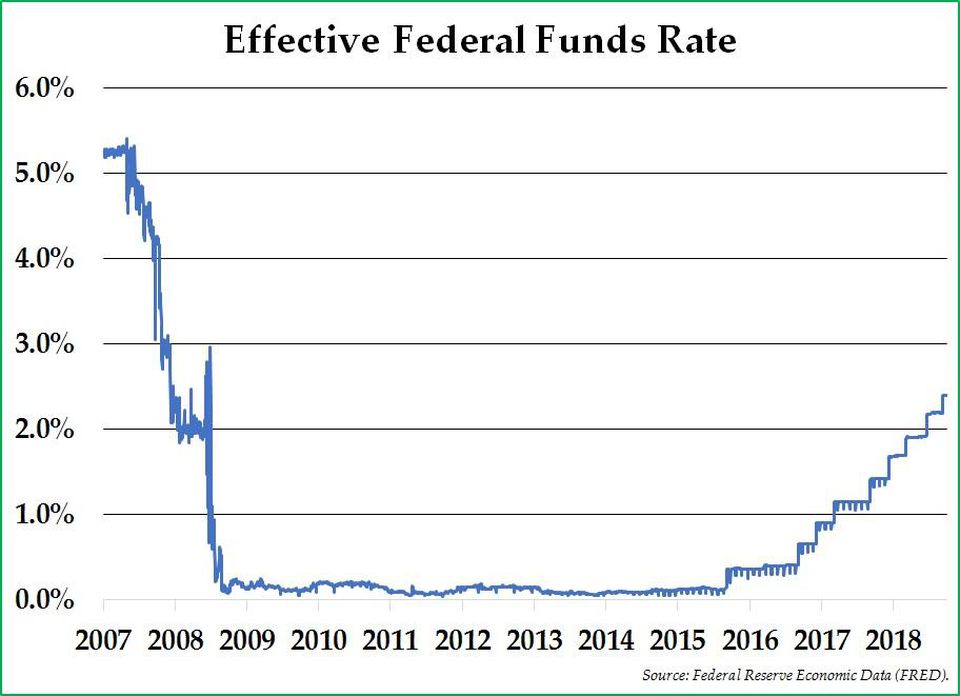 Quantitative easing was also central to the Federal Reserve’s strategy between 2009 and 2014.  The size of the Federal Reserve’s balance sheet increased by quantum leaps to $4.5 trillion by 2014 as the Federal Reserve printed money and used it to purchase U.S. Treasuries and mortgage-backed securities.  During this time, QE kept interest rates low and nudged investors who wanted to generate better returns into higher risk investments; investors flocked to junk bonds, emerging market debt, stocks, bitcoin, real estate, and collectibles.  The Federal Reserve’s asset purchases created financial asset price inflation that exists today across many different asset classes. 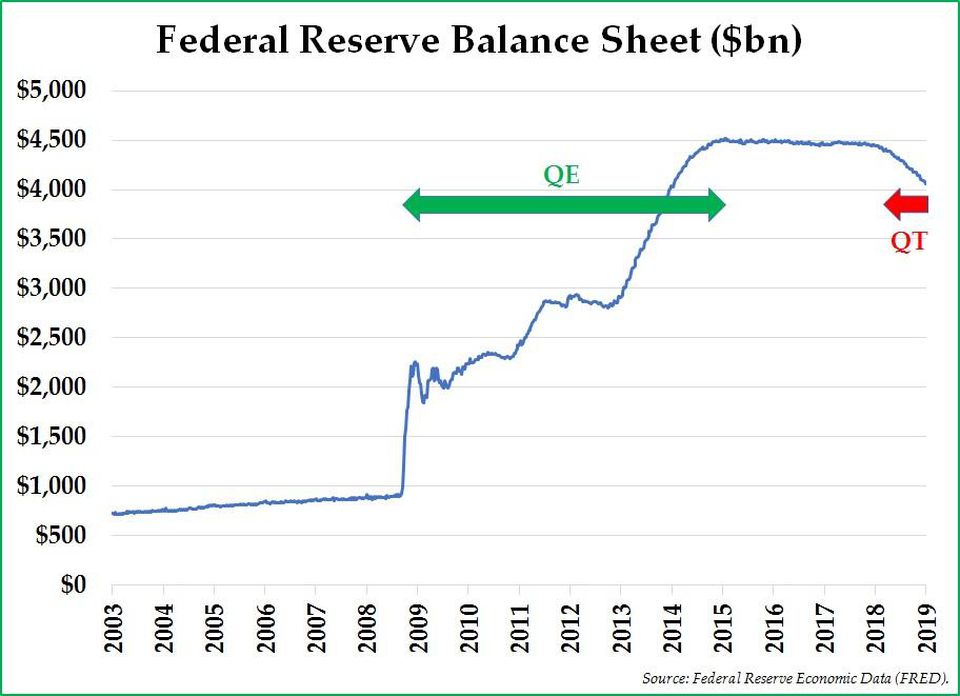 The problem is that, just as QE provided liquidity which juiced financial asset prices, QT withdraws liquidity and deflates financial asset prices.  Many years of QE and depressed interest rates created unprecedented increases in debt on the part of consumers, corporations, and governments, as the world became addicted to easy money and low interest rate debt.  We discussed the problem of excessive debt during our Q2 2018 client letter in which we calculated that private and public financial obligations in the United States alone now exceed $100 trillion.  It no longer takes much of an interest rise to have a discernible impact on borrowing costs for those entities that have far too much leverage, whether it be a household, a company, or a government.

By raising interest rates and simultaneously withdrawing money by selling down its bond portfolio, the Federal Reserve is again trying to normalize policy and reduce the availability of money to which the world economy and world markets have become addicted.  In 2018, and especially in December, investors experienced the withdrawal symptoms.  Investors in high-risk corporate debt pulled their money en masse, driving down leveraged loan and junk bond prices and increasing interest costs for corporations that have been issuing debt to buy back stock so aggressively over the past decade.

In our view, the policy decisions during and after the Financial Crisis created the problems that are evident today. Due to the Federal Reserve’s efforts to withdraw liquidity from markets that have become addicted to liquidity, a new liquidity crisis could very well be brewing. In our view, that is why markets were so volatile during Q4, and that is also why the only asset class that generated a positive return in 2018 was cash.  Without a reversal in monetary policy on the part of central banks, our prediction is for more investor pain to come.

Policy Changes Coming
We do not envy the job that Jerome Powell has before him; he has no good options from which to choose.  QE was an untested experiment in 2009, rolled out by Ben Bernanke and continued by Janet Yellen. In hindsight, it clearly worked to keep interest rates low, and it also worked to stabilize and then inflate financial asset prices.  Moreover, it did keep the economy growing, albeit at a lower than normal pace.  QE did not, however, create any kind of sustainable economic growth.  It also resulted in even more debt issuance so that the world economy is currently more leveraged than ever.

Just as QE was a policy experiment, undoing QE via QT is also a policy experiment.  We would speculate that, if continued until its planned policy conclusion, QT could generate economic results which appear to be the opposite of QE’s results, such as higher interest rates; asset price deflation; a credit-induced recession; and less debt as consumers, corporations, and governments default on their financial obligations.

Markets will probably remain weak without a reversal in QT, but we also expect a policy reversal if stocks continue to decline much further.  After all, it is important to remember the following:

We do not have a crystal ball, but, for the reasons stated above, we would be surprised if the Federal Reserve did not end QT and begin QE again sometime in 2019.  Our best guess is that another 15% decline in the S&P 500 Index (from its year-end level) would result in a significant policy reversal.  Should that occur, the dollar would likely respond by weakening in value relative to foreign currencies and commodities.

What We Are Doing
Our investment strategy is not changing significantly in the midst of this volatility.  We are continuing to look for high quality companies whose share prices are significantly undervalued, in our estimation.  Despite the recent stock market volatility, we do not believe it is prudent to go to 100% cash due to the policy uncertainty described above.  Holding cash comes with its own set of risks.

However, we are making additional efforts to make sure that the balance sheets of those companies to which we have committed capital remain healthy.  We would rather not own investments in companies that do not generate cash flow and that are reliant upon capital markets to fund their ongoing operations through debt issuance.

Our bond strategy has changed somewhat because we are buying incrementally more Treasury debt today. U.S. Treasuries are far easier to buy and sell quickly, and we believe it makes sense to err on the side of owning investments that are highly liquid so that we can quickly take advantage of buying opportunities.  With our corporate bond purchases, we are keeping our maturities short to maximize liquidity and minimize interest rate risk.

Our precious metal strategy remains the same.  As the frailty of the financial system increases and as the fiscal condition of the U.S. government worsens, we think the chances that gold becomes the ultimate safe haven asset in the next crisis are increasing rather than decreasing.  Today, it simply makes enormous common sense to maintain an insurance position in gold.

In this turbulent market environment, we encourage you to try to remember that you are investing for the long-term.  If you are having a difficult time doing that in the midst of such high levels of market volatility, please do not hesitate to email or call us with your concerns. We are happy to discuss what is going on with the market and your portfolio with you.

Thank you for your continued trust in asking us to manage your investment portfolio.  We are working harder than ever right now to make sure that our decisions on your behalf are good ones.

P.S. As we mentioned to you in our letter last quarter, we want to remind you that the name of our firm will change from “Pekin Singer Strauss Asset Management” to “Pekin Hardy Strauss Wealth Management” effective February 1st, 2019.  The firm’s new name will reflect Brandon Hardy’s important ongoing role at the firm while using the more modern term, “wealth management,” to describe the work we perform on behalf of our clients.  With the name change, our website and email addresses will change accordingly, although our existing website and email addresses will continue to work perfectly well.  Nothing else will change at the firm or in our mission to give you personalized attention and prudent stewardship of your capital.

This commentary is prepared by Pekin Hardy Strauss Wealth Management (“Pekin Hardy”) for informational purposes only and is not intended as an offer or solicitation for the purchase or sale of any security. The information contained herein is neither investment advice nor a legal opinion. The views expressed are those of the authors as of the date of publication of this report, and are subject to change at any time due to changes in market or economic conditions. Although information has been obtained from and is based upon sources Pekin Hardy believes to be reliable, we do not guarantee its accuracy. There are no assurances that any predicted results will actually occur. Past performance is no guarantee of future results. The S&P 500 Index measures an index of 500 stocks chosen for market size, liquidity and industry grouping, among other factors.