King Dollar and the impact on the global monetary system 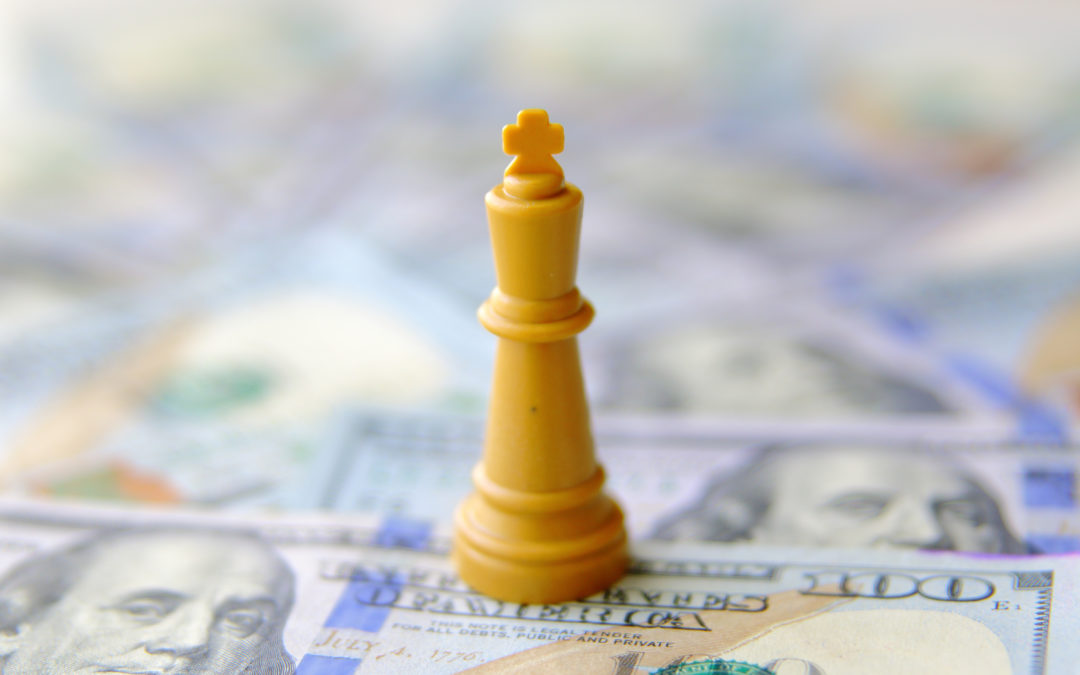 “I’m the straw that stirs the drink.”

Over the past year, strength in the value of the dollar has largely dominated asset class returns and has been at the front and center in driving investor sentiment. Ever since the end of the Second World War, the U.S. dollar has acted as a fundamental linchpin of the global monetary system. As the premier reserve currency, the dominant medium of exchange, and a store of value, the greenback deservedly warrants the moniker, “King Dollar”. Despite an ongoing tilt eastward and a concurrently diminished role of the United States in terms of global trade and GDP, roughly 60% of the global population still lives in a world in which their local currencies either 1) are the dollar, or 2) are pegged to the dollar.[1] Indeed, the dollar’s pivotal role as the “straw that stirs the drink” has powerful economic repercussions, particularly so during dollar volatility spikes like the one occurring now.

Issuing the world’s reserve currency confers material benefits to the United States. First and foremost, the lure of King Dollar allows the U.S. government and its residents to borrow money at a lower interest rate than might otherwise be available. The United States also benefits from cheap imported goods and services, despite a trade deficit that spans decades and seems to be getting bigger by the day. Rather than exporting goods, the United States exports financial assets in the form of U.S. Treasuries, which have been purchased by central banks around the world to bolster their foreign currency reserves and to keep the value of their respective currencies low relative to the dollar. And, a decidedly Machiavellian benefit is America’s enhanced ability to twist the arms of foreign companies and governments abroad that are dependent on dollar dominance.

However, as they say, there is no free lunch. The drawbacks of the outsized role of the dollar in the broader global economy have become more pronounced of late: 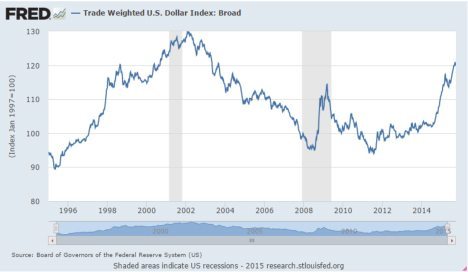 [1] A dollar rally has been associated with EM economic issues in 1980-1985, 1997-1998, 2008-2009, and 2013-2015. As an example, during the Asian Financial Crisis of 1997-1998, capital inflows dried up and then currency pegs broke. EM currencies plunged in value, thus pushing up the cost of dollar debts. Many overextended EM borrowers who had been financing their debt in dollars were unable to repay obligations due to increased debt service costs associated with the sharp changes in currency exchange rates and the higher rates required to refinance ongoing debt. This double whammy resulted in accelerating rates of default for foreign debtors that had a sizable portion of their debt denominated in dollars instead of their respective local currencies. A brutal recession ensued afterwards.

The dollar has been trending higher for over four years, and, more recently, the dollar increased in value by 13% in 2014 and an incremental 7% so far in 2015. Beyond the withdrawal of quantitative easing (QE) by the Federal Reserve, a number of factors working in concert have contributed to dollar strength:

As a result of the aforementioned factors, the dollar has accelerated in value at a rapid pace and for an extended duration. Since the end of QE3, as demonstrated in the chart provided at the top of the next page, nearly every asset class has underperformed cash (which, of course, pays a whopping rate of return of zero). Given the stark dichotomy between the underperformance of the vast majority of financial assets since the end of QE3 against the tremendous performance of many financial assets from the bottom of the Credit Crisis to the end of QE3, it makes one question the underlying strength of the economic recovery. Truth be told, these trends send a disconcerting signal that the economic gains generated since the Credit Crisis may be more related to easy monetary policies than underlying productivity improvements and job advances. 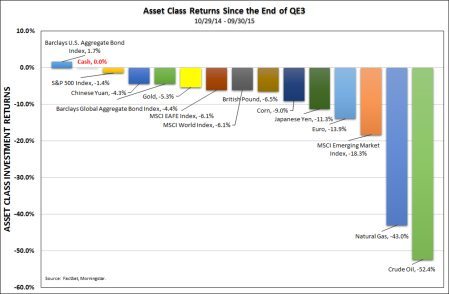 The decline in value of nearly all asset classes versus the dollar is a concerning development, and especially so if it continues. A similar sort of flight to the dollar occurred during 2008, which eventually devolved into a full-fledged financial crisis. With that said, the Federal Reserve is now more cognizant of systemic risks. If the dollar continues to strengthen, the Federal Reserve will be more likely to loosen monetary policy once again in order to take the wind out of the dollar. Just since the end of the third quarter, however, the market has started to discount the potential for a continuation of accommodative monetary policies by the Federal Reserve in the months ahead, thus causing a partial dollar reversal and improved market sentiment of late.

In conclusion, the surprising strength of the dollar over the past fifteen months adds to investor concern on how to invest in the current environment. Besides the strong dollar, many asset classes look expensive, government balance sheets have deteriorated since the financial crisis, and, with China’s economic growth decelerating, global economic risks are rising. In that light, the temptation to raise even more cash remains high.

However, central banks are on alert, and an extended period of deflation does not seem to be in the cards. In response to weaker than expected growth, central banks outside the United States are providing additional monetary stimulus. If the U.S. economy slows further, the possibility of aggressive intervention on the part of the Federal Reserve to avoid deflation in the future remains high. Thus, the best option for the long-term investor remains a diversified portfolio of uncorrelated asset classes (including cash), which, over the long-term, should outperform a 100% cash position considerably.

As always, we thank our clients for their continued support of Pekin Singer Strauss in our efforts to guide our client capital through these turbulent market challenges.

The MSCI EAFE Index (Europe, Australasia, Far East) is a free float-adjusted market capitalization index that is designed to measure the equity market performance of developed markets, excluding the US & Canada. The S&P 500 Index measures an index of 500 stocks chosen for market size, liquidity and industry grouping among other factors. The Barclays U.S Aggregate Bond Index is a market-cap weighted index that tracks performance of investment grade bonds in the US. The MSCI Emerging Markets Index is a float-adjusted market capitalization index that consists of indices in 21 emerging economies.