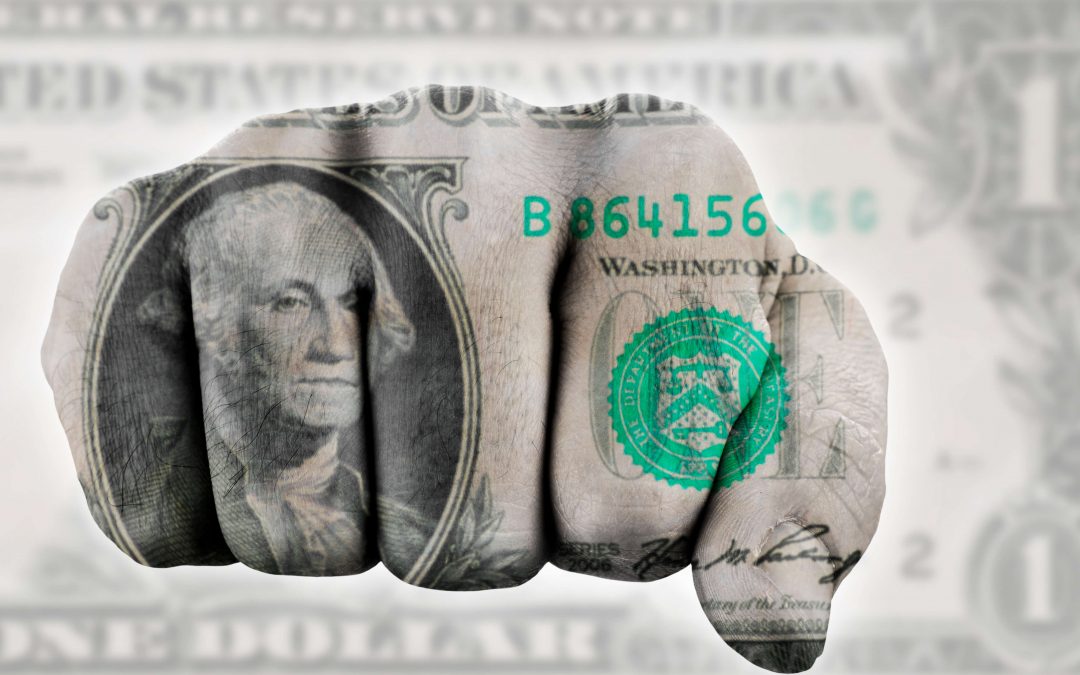 “When you remember we are all mad, the mysteries disappear and life stands explained.”

In past letters, we have addressed the craziness of the current investment era multiple times. In August 2020, 10-year Treasury bond yields reached an all-time low of 0.5% while $17 trillion dollars of sovereign bonds in Europe and Japan were paying negative yields to investors. Using the word “madness” to describe the interest rate environment in 2020 would have been entirely appropriate; the interest rate trough reached that month likely represented the lowest interest rates in 5,000 years of monetary history. 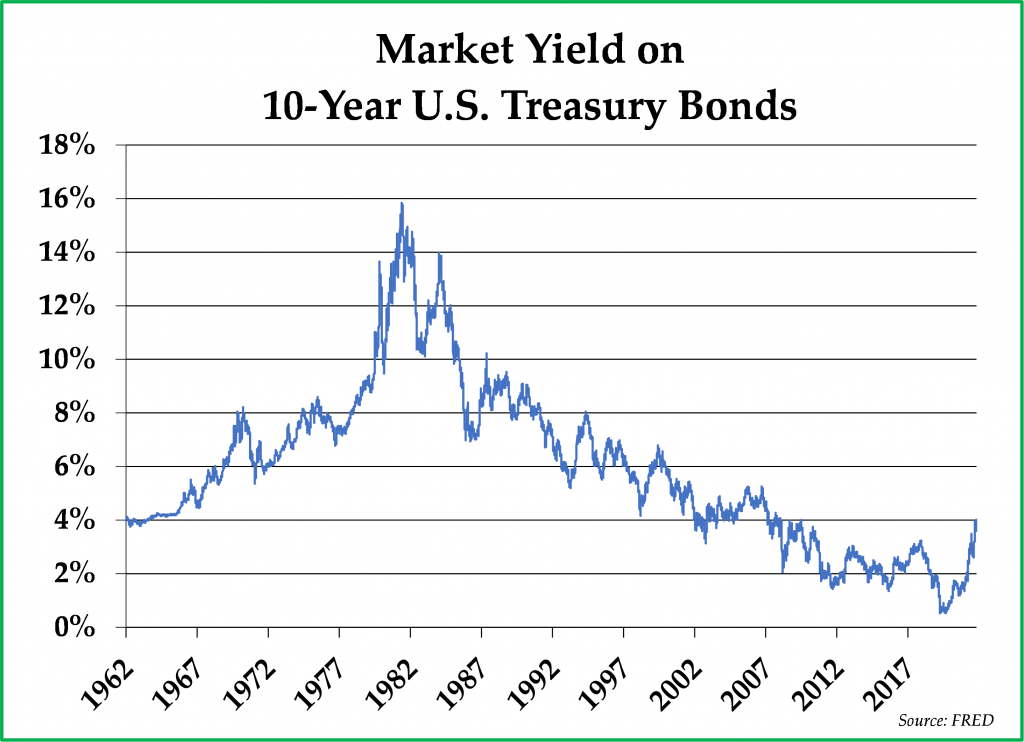 Outside the United States, interest rates generally have been increasing this year, for many of the same reasons, and global financial markets have reacted accordingly. The global stock market is now in a bear market and, remarkably, the U.S. Treasury bond market is in the midst of its deepest correction of the past 100 years. Global economic growth has slowed to recessionary (or near recessionary) levels as consumers pull back on purchases of housing and automobiles while companies have placed restraints on their capital expenditures. Just as 2008 and 2020 have become important years of market history, so too will 2022.

Equity and bond markets aside, the currency markets have also experienced historically extreme exchange rate gyrations thus far in 2022. Several emerging market countries are in the midst of full-blown currency crises. For example, the Sri Lankan Rupee is down 78%, the Argentinian Peso is down 30%, and the Turkish Lisa is down 28% through 9/30/22.  While these currency moves are extreme, they have happened before in emerging market countries. What makes this time different is that they are also happening in developed economies. From the beginning of the year through 9/30/22, the Japanese Yen is down 25%, the United Kingdom Pound Sterling is down 21%, and the Euro has declined 16%. All of these currencies, emerging and developed, have weakened considerably against the US Dollar.

Some analysts have called the dollar’s remarkable strength this year a “wrecking ball.” Indeed, a strong dollar is not a good thing for financial markets (just look at declines in the stock and bond markets) or for the global economy (currently heading into a global recession). Arresting the depreciation of currencies around the world is necessary to alleviate extreme inflationary pressures outside the United States and allow real growth to recover from the currently dismal levels. The root causes of these extreme currency movements vary by country, but the primary drivers include interest rate differentials, a worldwide energy crisis exacerbated by the war in Ukraine, and margin calls on dollar-denominated debts.

The DXY index, a measure of the dollar exchange rate against other developed market currencies, has soared by 16.8% year-to-date, reaching a level not seen since 2002. The narrative behind this remarkable dollar strength is that the U.S. dollar, while far from perfect, is the “cleanest dirty shirt” in a drawer full of even dirtier shirts. Put differently, the dollar does not deserve to be strong, but it does deserve to be stronger than other currencies which are even worse. There is some truth to this narrative, but we want to explore why the relative relationships have changed to such a great extent this year. 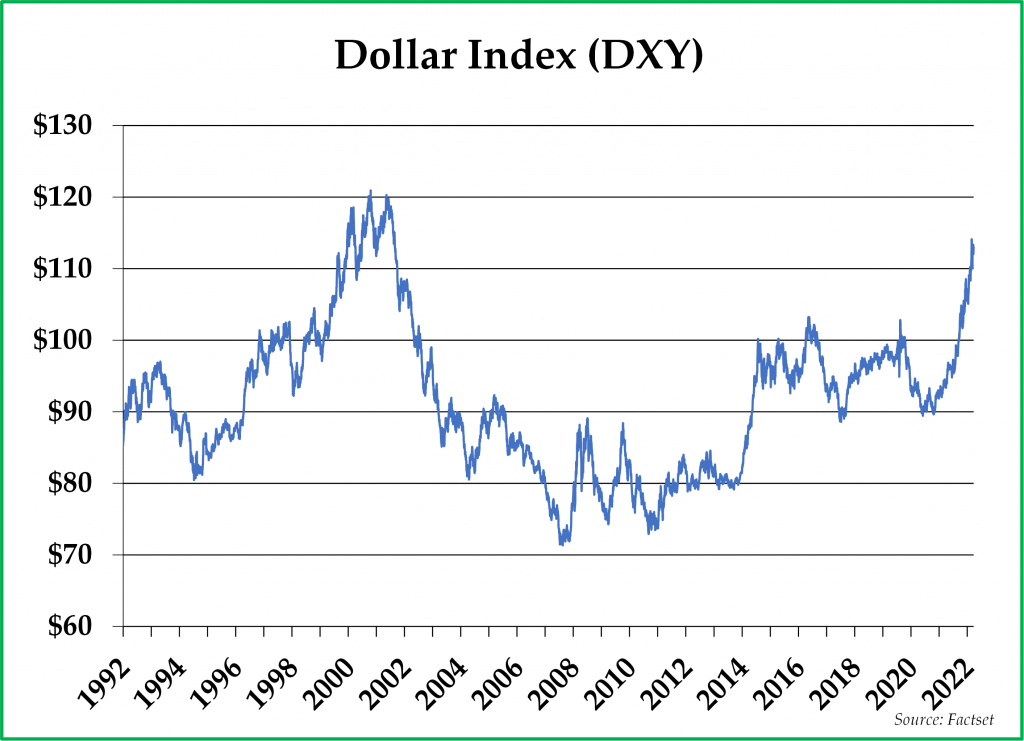 In summary, the overall picture for currencies of the developed world is quite a gloomy one at the present moment, and the U.S. dollar has been appreciating because it is indeed in somewhat better shape on a relative basis. After all, the U.S. dollar still enjoys reserve currency status, and the United States can also supply most of its own food and energy needs. These benefits have not prevented the dollar from depreciating against energy and food prices this year, but it has prevented the dollar from depreciating against most foreign currencies. These advantages are longstanding advantages, but they have become much more important this year.

If the Federal Reserve continues to hike interest rates and the dollar continues to appreciate, most financial assets will continue to decline in price. This year, cash has beaten almost every asset class around the world. More and more investors are betting that the dollar’s strength will continue, extrapolating the current trend far into the future. Popular business magazine covers, which have historically proven to be a wonderful contrarian signal, suggest to us that the current bull market in the dollar might be closer to the end than the beginning. 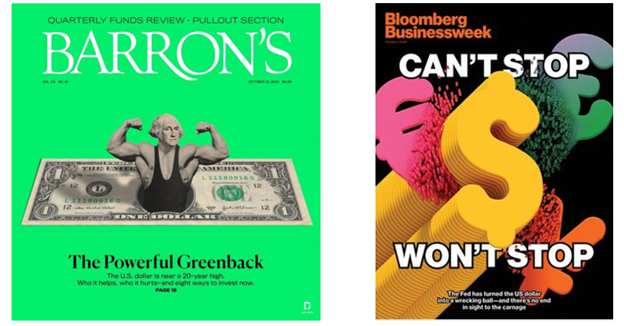 This leads to the question of what might cause the dollar to stop appreciating versus other currencies. As always, we have no crystal ball with which to predict the future, but we would be looking for one or more of the following to happen in order for the dollar to depreciate against other currencies:

We would suggest that a reversal is likely a matter of weeks and months from now rather than years. The strength of the dollar is driven by quickly rising interest rates on U.S. Treasuries, which now exceeds 4%. Last year, the US Government paid approximately $400 billion in interest costs on its debt.  If interest rates stay at current levels, then given rising Federal Debt levels, projected annual interest costs could easily exceed $1 trillion. The combination of a stronger dollar, rising interest rates, and an energy crisis are pushing the world into a recession which will soon put enormous pressure on the U.S. budget deficit as tax receipts historically decline during a recession. Due to the excessive indebtedness of the U.S. government, declining tax revenues combined with 4% interest rates would be an untenable situation which the U.S. government could not tolerate for very long.

When an eventual pivot happens, we believe that it will be an excellent time to own precious metals such as gold and silver, energy, commodity producers, and emerging market stocks. Until that time, we are staying somewhat defensive, with a larger-than-normal position in cash and short-term Treasury bonds.

We are grateful, as always, for your entrusting us to manage your assets through challenging market environments such as the current one.